Midsummer may simply refer to the period of time centered upon the summer solstice, but more often refers to specific European celebrations that accompany the actual solstice, or that take place on a day between June 21 and June 24, and the preceding evening. The exact dates vary between different cultures. Midsummer is especially important in the cultures of Scandinavia and Latvia where it is the most celebrated holiday apart from Christmas.

Do You Believe in Fairies? 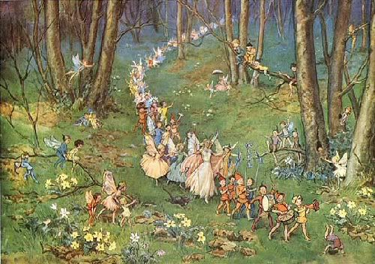 The Filianic/Deanic religion celebrates many beautiful feast days which honors Nature; We have a feast day that celebrate flowers, another celebrates roses and yesterday was the true MidSummer’s Eve. Whilst today, Rosea 12 / June 24 is the Feast of Fairies. As we celebrate, we remember that behind every living thing on this planet, in this solar system and through-out the cosmos lies an higher, spiritual reality.

Our Faith teaches that the magickal folk do exist. Like us, they are fellow creatures of Dea whose mission is to help take care of Nature. Many consider them to be multi-dimensional creatures. It should come as no surprise that within this vast multi-verse, there are beings of such nature. Last night was the traditional evening to celebrate such beings and to be thankful for their work.

There are many ways to do this; through ritual, reading, poetry, a bonfire and a feast offering to name a few. This is also a good night for divination through either the runes or tarot.

Here is the scripture reading for today’s Feast Day:

https://theahaus.files.wordpress.com/2014/08/fulltext-of-ncuv.pdf
(with thanks to Glenn King)

12. And the Mistress of All Things was filled with delight, and ran laughing through the forests of the earth. 13. And every peal of Her voice became the image of a silver fragment of Her Spirit. 14. And the trees and rivers were filled with nymphs and every kind of sprite, and all were Her daughters; Her love for each was inexhaustible, for each was a reflection of some boundless fragment of Her unbounded Spirit. 15. And all their multitude did not exhaust the number of the fragments of Her Spirit. 16. And to each was given the governance of some earthly thing.

This article explains how fairies are a lower manifestation of the angelic realm. http://www.articlesbase.com/religion-articles/spirituality-the-truth-about-fairies-are-fairies-real-430813.html

The story of the Cottingley Fairies has captured the imagination for almost 100 years. We must remember that this was in a day and age before computers and digital photography were in existence and yet, the photographs taken by young Miss Frances and her cousin, Miss Elsie fooled many experts and made believers out of such dignified personages as Sir Arthur Conan Doyle, the author of the famous Sherlock Holmes series.

The world famous story of Findhorn (pronounced Fithhorn) is simply amazing. “Newly updated to showcase color photographs, this spiritual classic presents the history and philosophy of Scotland’s Findhorn Community. Findhorn was founded more than 40 years ago in far northeast Scotland on windswept and barren sand dunes that happened to sprout a miraculous garden. Plants, flowers, trees, and organic vegetables of enormous sizes began to grow in a small plot around the 30-foot caravan trailer inhabited by three adults and three children living on meager unemployment benefits. Guidance by God and absolute faith in the art of manifestation led the occupants to this unlikely locale to create a magnetic center that would draw people from all over the world. Their discovery of how to contact and cooperate with the nature spirits and devas that made the garden possible sparked a phenomenon that continues today, as Findhorn has grown into a thriving village housing hundreds of people from all over the world and an internationally recognized spiritual-learning center.” Taken from: http://www.amazon.com/The-Findhorn-Garden-Story-Inspired/dp/184409135X. Other sources: http://www.findhorn.org/aboutus/vision/history/#.Ucb42NjEXh4

Here is a nice article on ancient traditions in Ireland: http://www.irelandforvisitors.com/articles/midsummer%27s%20fire.htm

Many stories abound of true encounters with the Fairy folk; construction which had been halted due to strange happenings near Fairy mounds and other interesting stories of the so-called Fairy mounds, themselves.

There are many Fairy poems which can be found online and, of course, in books, but the best ones are those that you might write, yourself! If you feel inspired to write a poem in honor of the magickal folk, find a sacred space in your yard, a place beneath the moon or a seat by your home altar and recite it out loud. And, don’t forget to sing an hymn to the Fairy Queen!

Some of my favorite fairy poems:

This lovely article contrasting Disney and folklore fairies with the real thing is told by ‘a member of the fae, herself.’ 🙂 http://www.fairies-secrets.com/famous-fairies.html

You may place a supper feast for the fairies out in your yard. (The remains of which, can be given to the birds.) Wine mixed with honey, milk mixed with honey, candies, little sweet cakes and fruit like strawberries and blueberries are all favored by the magickal folk. The Fairies take in the energy from the offerings while leaving the physical remains. If an animal eats the offering, that is a good sign. Bright objects, gemstones, sea glass, pretty marbles and other shiny objects are looked upon with favor by the Fairie Folk.
Summer Solstice was written by a Celtic expert, John Matthews and may be purchased from a lovely Celtic company found here: http://www.gaelsong.com/product/149290/books-celtic-books
Recipes for the Feast Day may be found in the book, MidSummer, Magical Celebrations of the Summer Solstice. http://www.amazon.com/exec/obidos/ASIN/0738700525/ref=nosim/priceclash-20
Other recipes for MidSummer may be found here: http://allrecipes.com/Recipe/Midsummer-Nights-Salad/
http://www.tasteofhome.com/Recipes/Midsummer-Sponge-Cake/
http://www.unc.edu/~reddeer/recipe/rec_litha.html#cukesoup
http://www.food.com/recipe/midsummer-vegetable-chowder-501227
http://www.yumsugar.com/Swedish-Midsummer-Recipes-30799975
The colors for this feast day are gold and yellow.
Traditional flowers and herbs for this feast day are: marigolds, chamomile, marjoram, violets, elderflowers, vervain, thyme, sunflowers, rosemary, roses, primroses, meadowsweet, lavender, lemon balm, honeysuckle, hazel, heather and heather.
It is customary to wear a wreath or crown of flowers in one’s hair with ribbons.
Torchlight processions and bathing (one’s face) in water from wells or rivers are yet, another tradition.

Be sure to thank the Nature Spirits in your yard or in your area. Ask Dea to bless them as they are also Her daughters.

British - Island European. I researched ancient mythologies and deities aged 12. I discovered Dea through a booklet in a bookshop, aged 18. View all posts by mydevotionstodea